Smart A. Micah, University of Maine School of Law 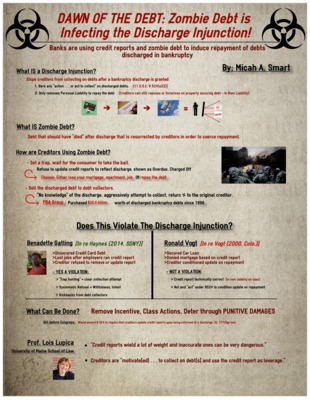 When a debtor is granted a discharge in bankruptcy, an injunction is installed to bar any attempts to collect those discharged debts. Many courts have interpreted this injunction as barring only affirmative attempts to collect. Relying on that interpretation, some large financial institutions have been systematically refusing to update credit reports to show the discharged status of debts. These out-of-date reports indicate to future lenders, landlords, and employers that the debt is still in collections or “charged off.” As a result, former debtors are faced with either losing a mortgage, apartment, or job opportunity or repaying the debt. In this way, debts that should have "died" after discharge are resurrected and continue to inhibit the debtor's fresh start. There is disagreement among courts about whether this practice violates the discharge injunction because the creditors have taken no affirmative action to collect. Not only is this a clear attempt to collect, but the widespread, systematic nature of the problem can effectively be deterred only through large punitive damage awards and district-wide class action lawsuits.”