Living the World War: A Weekly Exploration of America's Entry into World War I 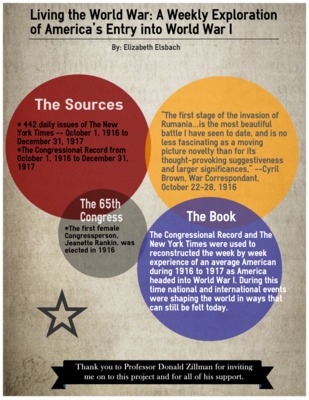 The book focuses on America's entry into World War I based on the perspective of people watching the war develop as it occurred. Using both the New York Times record and the Congressional Record we followed the development of war legislation, domestic concerns such as food and coal shortages, the suffrage movement, war rhetoric, and the everyday life of Americans on the brink of World War I. These are the facts and stories that tend to be neglected or forgotten in the broad overarching teaching of history. This book seeks to delve into the heart of American government and the heart of the American people as America prepared, and then entered into, The Great War.