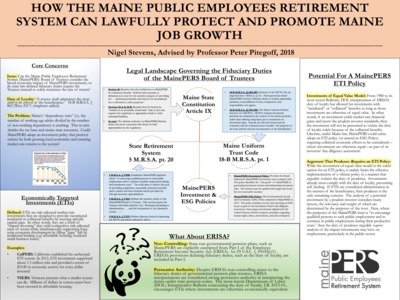 Can the Maine Public Employees Retirement System (MainePERS) Board of Trustees consider the broad economic impact of MainePERS investments, or do state-law-defined fiduciary duties require the Trustees instead to solely maximize the rate of return? For several decades, trustees of public pension funds and other retirement funds have engaged in Economically Targeted Investments (ETIs), both to secure retirement income and to promote collateral benefits (e.g. job growth in a particular state). ETIs, however, also have had a long history of controversy concerning their legality and propriety under fiduciary duties defined in the Employee Retirement Income Security Act (ERISA) and state pension codes. In this project, I reviewed selected ETIs, as well as the legal landscape defining MainePERS Trustees’ fiduciary duties under both ERISA (as persuasive authority) and Maine state law (as controlling authority). Since 2008, there has been a noticeable decline in ETIs, likely due to the financial crisis and a shift in Department of Labor (DOL) interpretation during the George W. Bush Administration. The DOL, under the Obama Administration, again revised its interpretation of ERISA to encourage ETIs, and today the funding ratio of MainePERS is strong. Furthermore, MainePERS Trustees have recently adopted an Environmental, Social and Governance (ESG) Policy that requires consideration of material ESG risks and value-creation opportunities as part of their fiduciary duty of due diligence. In consideration of the history of ETIs, various interpretations of fiduciary duties under ERISA, the controlling Maine state law, and the recently-updated, modern policies of MainePERS, I propose that MainePERS Trustees incorporate an ETI policy into their investment policy, to more holistically further the interest of its members while promoting the collateral benefit of much-needed job growth in Maine.