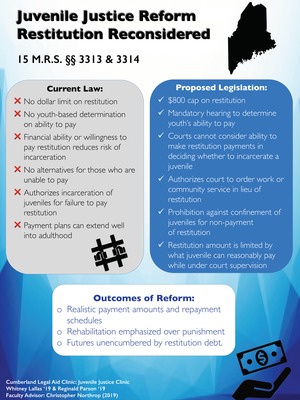 Restitution is often included in criminal dispositions in order to hold the defendant accountable for their wrongful actions. Under current law, juveniles who have been ordered to pay restitution, are held to the same standard as adults who have been ordered to pay restitution. By doing so, the law fails to account for the many differences between juveniles and adults. With the hopes of addressing the shortcomings of current law, a proposal has been made to the Maine State Legislature under LD ###. The inspiration for this bill comes from a common yet unfortunate scenario where a significant amount of restitution is included in a juvenile’s disposition. The repercussions of this type of disposition, where the amount of restitution is far more than what the young person can pay, are far reaching and lead to further financial struggle.