The Right to Counsel for Noncitizen Misdemeanants

Emily A. Arvizu, University of Maine School of Law 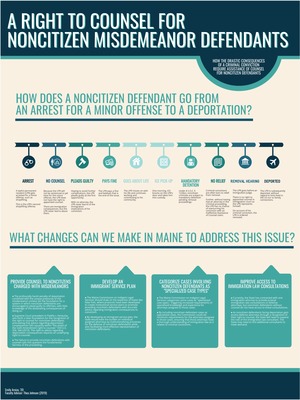 Indigent noncitizen defendants with misdemeanor charges face nearly insurmountable challenges as they navigate an ever increasingly complex web of immigration and criminal laws. Without a recognized right to appointed counsel, these defendants are left on their own to confront drastic and disproportionate consequences for, in some cases, low-level crimes. For many of these defendants, they do not learn about the immigration consequences of their convictions until they are picked up by Immigration and Customs Enforcement (ICE). A failure to understand the implications of a guilty plea for a minor offense could lead to removal from the country and separation from family. The Sixth Amendment guarantees defendants the right to counsel and the Supreme Court has struggled with when and under what circumstances that right attaches. Ultimately, the right to counsel seeks to level the playing field for defendants who face a deprivation of liberty against adversaries who benefit from a full knowledge and understanding of the law. Noncitizens may be among the most disadvantaged in this adversarial model and, while deportation is not yet fully considered a punishment, it is undoubtedly a severe penalty resulting from criminal convictions. The Supreme Court in Padilla v. Kentucky called attention to the immense harm that deportation imposes on a noncitizen, articulating that advice regarding deportation consequences of a conviction falls squarely within “the ambit of the Sixth Amendment right to counsel.” 559 U.S. 356, 366 (2010). The failure to provide noncitizen defendants with counsel calls into question the fundamental fairness of the proceeding. The life-altering consequences of a misdemeanor conviction or guilty plea necessitate the appointment of counsel for indigent noncitizen defendants, unable to protect themselves against an increasingly complex and punitive system.