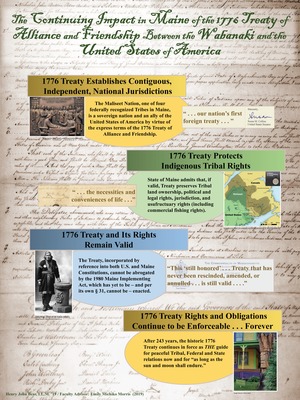 The Maliseet Nation has throughout our history retained our ancient and aboriginal rights to fish, hunt, and maintain sovereignty and ownership for political, legal and economic purposes over our well-defined land: the Wolustiquiy, or "Aroostook" region, comprising some five million or so acres of land on the "American" side of the so-called international boundary between Canada and the United States. These rights are critical to the economic self sufficiency, self governance, self determination, and culture of the Maliseet Nation. Despite this history and the Maliseet’s treaty relationship with the United States, a controversy has recently arisen over Maine’s attempt to criminalize Maliseet fishing activities in coastal Maine waters, even though the exercise of the Maliseet’s treaty-based rights to fish, until only recently, had not met even a shadow of impediment and is no less necessary to the existence of our Tribe than the air we breath. Maliseet aboriginal and treaty rights exist to exempt the Maliseet, moreover, from such state laws – laws that contradict the express terms of the “Watertown Treaty of 1776” and the Maine state constitution, which requires state compliance with the Treaty. Documents, expert opinions, and certified archival government records, as well as recent statements by current government officials and representatives prove that the Treaty continues to be valid and applicable. A proper understanding and enforcement of these treaty rights and all applicable law will not only secure the benefits intended by the Treaty and the respective constitutions of all parties to the Treaty, it will also reduce or, hopefully, eliminate the current jurisdictional controversy that looms over an otherwise positive relationship between the Tribe and the State.