Drowning in the Life Saving Service 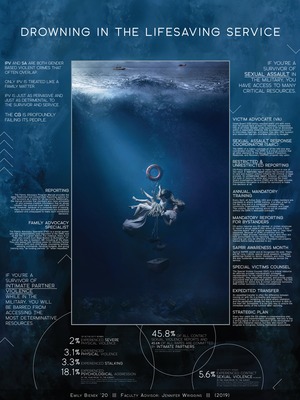 Gender based violence includes both Sexual Assault (SA) and Intimate Partner Violence (IPV) - also known as Domestic Violence (DV) - is reported to be as common or more common than SA. Moreover, nearly half of sexual assaults are perpetrated by current or former intimate partners and even more are perpetrated by those under the “DV umbrella” including persons who live in the home like siblings and parents. Despite that fact, the United States Coast Guard's (CG) program aimed at assisting survivors and holding offenders accountable for IPV or DV is both inadequate and unworkable. In comparison, the CG has a robust program working to assist survivors of SA as well as providing mechanisms to hold offenders accountable, train and employ active bystanders, and attack the climate that allows for rampant gender based violence in the first place. This report argues that the CG is failing its members by working to end only one piece of gender based violence, while effectively ignoring the other. It provides common sense mechanisms to even out the allocation of resources and to re-orient the programs so that they focus on the underlying gender based beliefs that inextricably link and perpetuate the two forms of violence.