Law Review Article: Michigan v. EPA and the Erosion of the Chevron Doctrine 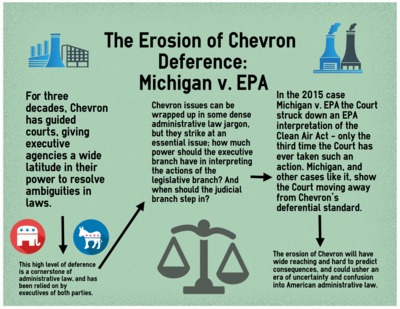 The Chevron Doctrine is a bedrock principle of American administrative law, and plays a critical role in guiding judges on how to review agency interpretations of law. Today, as Michigan and other cases indicate, Chevron is in an increasingly vulnerable position. The Supreme Court appears to be increasingly willing to carve exceptions into the doctrine and find reasons not to grant agencies the deference that Chevron established. While Chevron issues tend to be enmeshed in a dense thicket of complex (and frankly quite boring) administrative law, they strike at the very heart of the American notion of separation of powers. Does the executive branch have the right to resolve legislative ambiguities? Should courts, which "say what the law is" but lack the expertise of the agencies, step in if they think a better interpretation is possible? How does all of this work within a vast, ever expanding administrative state never dreamed of by the framers of the Constitution? Chevron's attempt to resolve these issues, and the current erosion of Chevron, are indicators of where we stand on as a country in answering these vital questions.